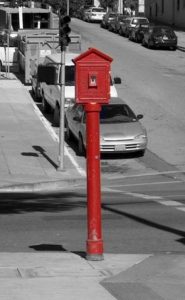 re alarm systems have gone through many changes over the years and are continuing to evolve at a fast rate. The original fire alarm systems were wired straight to the fire department! Gamewell’s original birdhouse fire alarms were located outside of the buildings on street corners. In comparison, today’s wireless fire alarm systems can communicate the exact location of a device through IP or Radio communications.

Both wired and wireless systems exist today, and they both have their proper applications.

Wired fire alarm systems consist of two types, conventional and addressable. Conventional systems require a facility to be divided into zones. When an alarm is triggered, the description at the fire alarm control panel is a general location.

In both instances, wireless devices are installed which receive their power from a battery.

Moving to IP and Cellular Communications

Many end-users are beginning to move from Plain Old Telephone Service (POTS) lines to either Internet Protocol (IP) or Radio (cellular) communications. POTS lines are slowly becoming obsolete. Cellular communicators can be installed in many places to communicate the condition of your fire alarm panel to a central station. IP communicators can also be installed which require a network connection back to a router. Many homes and most business have a network within their facilities which makes it possible to install an IP communicator.

Fire alarm systems and their means of communicating back to responding emergency forces have changed over time. The industry has moved from conventional panels which required POTS lines to be installed, to wireless fire alarm networks that can use cellular communicators or the internet to provide the exact location of an alarm. New technology has made fire alarm systems and monitoring more capable and more flexible in providing solutions to the end-user.